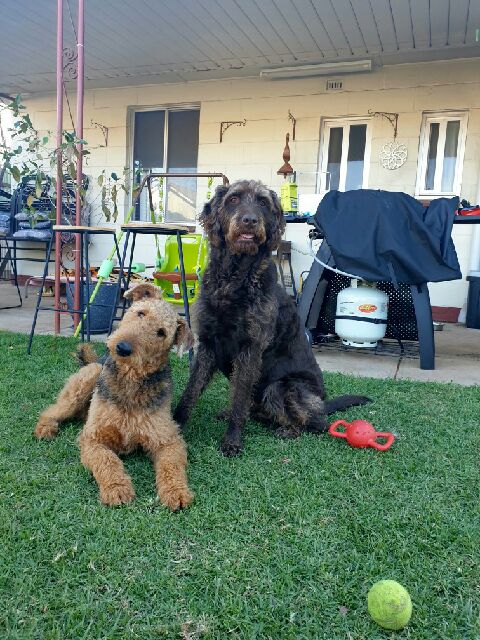 Our first rescue dog that we were blessed with was a gorgeous labradoodle who was surrendered by his original family when he was 6 months old so they could return home to China. Jetpets were wonderful when flying him from NSW to SA and placed him with a handler that could speak Chinese as this was the language that he understood. We did change his name from Shacco to Gus as this was short and easy for him to understand. His temperament is amazing. We decided to adopt a second dog as a mate for Gus and an Airedale came up on the RSPCA site in Queensland. Gypsy was 10 months old and surrendered by a young family who had bought her in Victoria to travel with but she became to big and boisterous. She was a ball of energy with so much character. When her paper work came through from RSPCA her date of birth was the same day and year as our first grandchild.
Sadly at the end of last year devastation happened when Gypsy was bitten and killed by a brown snake. Our life and Gus's was certainly changed for better but so much emptier without her.