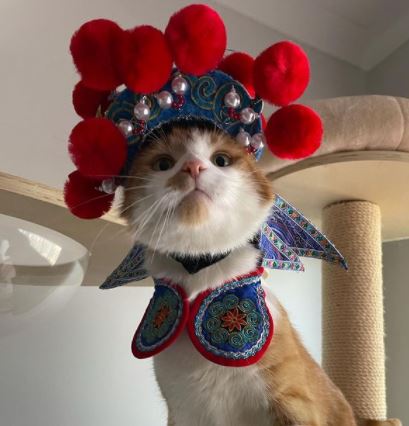 DouDou is always a sweet boy, when I first met him he was so shy, but I could tell he's so sweet wanted to play but was just frightened.

I put him in the cage and walked home with him right after our first 'date'. His foster home was just 500 m away from mine, but he was so scared that he peed in the cage. I took him in and realised he's covered in fleas the litter poor thing. after a little bath (he was so calm) I set up his litter conner for him.

He was so scared in the new environment at first, he wouldn't let me pet him and he was sleeping underneath my bed for about 2 weeks.

slowly slowly he came out of his shell, at first, he slept near my feet then later he slept on my pillow snuggling with me! He became this little God of Mischief, so playful and friendly. Use his little paw to tap me asks me to play with him. He also does fetching!

DouDou is the best thing I could ever have. His cuteness and warmness helped me to overcome my depression period. Love him so much!