Harry’s owner moved from Melbourne to an apartment in Sydney following Separation. Owner was absent for 3/4 of the month thru work, so Harry was looked after by fellow tenants. We rescued him via D.R.A at age 2, now 12. Harry got along immediately with our other daschie Molly, then 18 mths old; within 5 minutes of arriving home, Molly dropped a toy at his feet. Both love that we are on 1.25 acres and they have been inseparable since. Six years ago, Harry suffered from I.V.D.D.; following surgery and ten days in Sydney, he returned home, where he recovered fully. Two years ago, he had another episode, leaving him paralysed in the back legs. We bought him a cart and his courage and determination have been an ongoing delight to us. He still tries to stand on his back legs, albeit cross-legged. Harry is the most beautiful fur-baby one could wish for. He is so lovable, loyal and has a wonderful nature. He has given us so much love and happiness despite the hard effort involved with him, but he is totally worth it. He has his own bed I built for him and sleeps next to our bed. 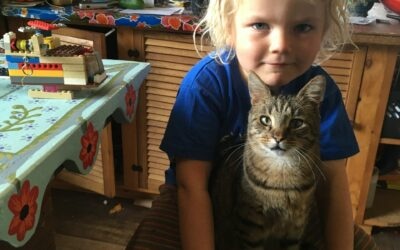